Councillor for Orpington ward
Kim was elected as an Orpington Ward Councillor in 2014 & enjoys representing the ward . Kim has lived in Orpington for 40 years now.

A retired Police Officer of 38 years service, she reached the rank of Chief Inspector .

Kim’s role on the Council is serving on, The Public Safety & Protection Committee. The Education Select Committee . The General Purposes & Licensing Committee. The Council BTTA Town- Twinning Representative .Kim sits on the safer neighbourhood panels of Orpington & Chelsfield . Kim is chairman of Neighbourhood Watch where she lives and is a member of the Green St Green Village Society Committee.

In 2015 Kim received a Public Nomination Certificate in the Partnership Category of the Local Government Achievement Awards.

2015-2016 Kim was the Mayor of Bromley Borough for a year -raising £ 50,000 for her chosen charities Bromley CONNECT & The National Brain Appeal.
Kim is a of the Fellow of the Royal Society of Arts.

Kim is a School Governor for Blenheim Primary School in Orpington.

Kim is married with 4 grown up children & is devoted to family life.

Kim is keen to continue to serve all the residents of Orpington Ward as she has since she was elected.

Appointments to outside bodies 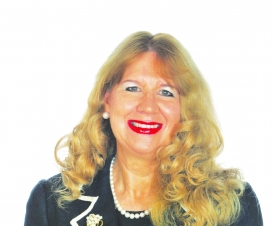